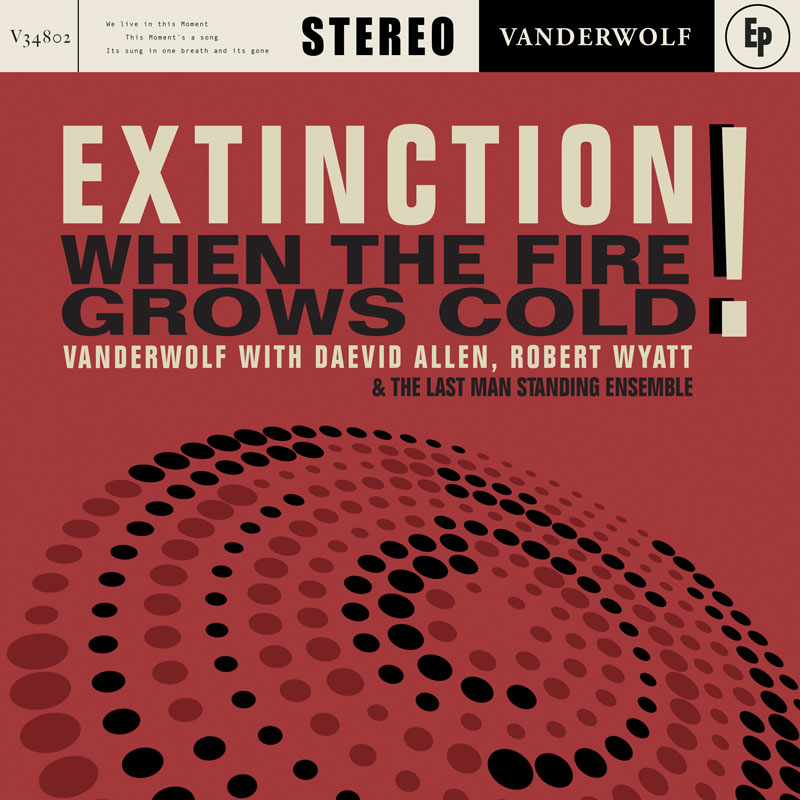 ‘’Extinction!’’ is the upbeat title of a 2-sided digital single from Vanderwolf and his former band, Last Man Standing.

Side A is “When The Fire Grows Cold”, a piano-led cinematic nightmare-lullaby co-sung by the legendary musician-activist, Robert Wyatt.

The B side is “Extinction!”, a 7-minute Balkan-brass psychedelic fantasy featuring the late, great Daevid Allen’s glissando guitar solo and the wonderful Terry Edwards (PJ Harvey, Lydia Lunch, Tindersticks) on saxophone. These two epic tracks capture the polarities of Vanderwolf’s vision: one song precise and quietly disturbing and one sprawling and transcendent.

“When The Fire Grows Cold”, which features co-producer Sam Sallon on piano, is lifted by what Wyatt referred to as a ‘’peasant-chorus’’. Chris Cordoba layered guitar-work lends a haunted quality to the song.

The idea of these tracks being paired is partially due to the thematic link of the lyrics: the folly of human progress that has brought us to the very brink of our own mass extinction. But it is also a linkage between Wyatt and Allen who met as kids in Canterbury England when Daevid Allen became a border in the Wyatt household at the age of 16. He had been shipped off by his family to England because he was too effeminate and too artistically-inclined for the rugged testosterone-driven culture of Australia in the early 1960s. ‘’Allen showed up with Charlie Parker albums under his arm and from their mutual love of bebop, a creative partnership was formed. We tried to reflect that love for jazz in the album artwork by Trend and Chaos – and of course, the music itself.’’

Together Allen & Wyatt, along with Kevin Ayers and Mike Ratledge, formed the Soft Machine who became the soundtrack for the swinging psychedelic 60s performing regularly at UFO club and the Roundhouse with their contemporaries, Jimi Hendrix and Pink Floyd.